Coffee in My Garden – Even on Rainy Days

The parrot wanted to be shown out of her cage. 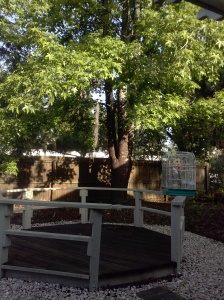 Sunshine returns to my garden 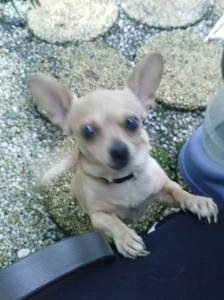 Easter lilies after the rain

It’s been raining here in the Sunshine State. All week long. Yes, I know it rains in other parts of the world. I have lived in many of those parts and grew to accept that as part of the package and even appreciate and enjoy those areas and most of those days.

We could always tell the newbies in Tokyo when they would call and say “So sorry it rained. The children were looking forward to our playdate in the park.” To which we replied “If you don’t learn to come out in the rain you will never see the outside of your house.” The Japanese even do construction in the rain. That was impressive.

I have been rained on in London, Paris, and on Vancouver Island. I have run in the rain, walked in the rain, danced in rain, sung in the rain.

I live in Florida now and I want my sunshine back.

I wasn’t going to come out this morning. Soggy is not my favorite state of being.

Wussy Me: “It’s raining.”
Air Force Me: “It hasn’t rained in eight minutes. Have you completely forgotten how to assess a situation? And you used to be a squad leader.”
Wussy Me: “There are things I need to do in the house. Maybe it’ll clear up later.”
Air Force Me: “Is that what you want?”
Wussy Me: “No. I want to have coffee in my garden and write.”
Air Force Me: “Then why aren’t you out there?”
Wussy Me: “It’s soggy. And it might rain on my new laptop.”
Air Force Me: “Oh boo hoo. When did you get to be such a princess? You have run on black ice on a narrow road at the edge of a cliff and lived to tell about it and you’re afraid of getting your sweet little sugar self wet? Get out of my face. I don’t even know you any more.”

So here I am, on dry cushions because we have the foresight to store those in the house since we’re in shower season now. Assess Situation: Wet table on lanai, three steps south, two steps east to the nearest cover. Extension cord obtained, towel thrown over wet table, travel desk on top of that. Good to go.

My world for the moment has been divided into wusses and non-wusses.

I am proud to say thanks to Air Force Me, today I am not a wuss.

It strikes me that Fran’s dogs (who are now our dogs since she passed) are out here in the swamp with me while my dog, The Princess, is watching me from the comfy dry couch.

The cats are watching from the kitchen window. Normally they would be out here. Wusses all.

My daughter’s parrot informed me that if I was going outside, so was she. She is not a wuss.

The squirrels, blue jays, doves, and cardinals are overjoyed that I chose not to be a wuss today as their feeders had been washed out and they were hungry.

And as a reward for my non-wussiness, here comes the sun.

We are now off of DEFCON 3.

← A Glimpse of My Acting Life
Weekly Photo Challenge – From Above →

7 thoughts on “Coffee in My Garden – Even on Rainy Days”