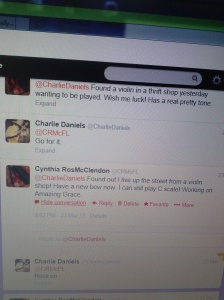 Daily Prompt: Goals
by michelle w. on May 22, 2013
When you started your blog, did you set any goals? Have you achieved them? Have they changed at all?

When I “started” my blog in March 2012, I had only one goal in mind – to avoid yet another “I can’t believe we all have blogs and you don’t – and you’re the writer!” conversation with my artist friends, all of whom have blogs and couldn’t believe that I didn’t. So one day, with another creative gathering coming I went ahead and started a blog. It was a very long afternoon. I had no idea what I was doing and what took me a few minutes to write took an eternity to post (there’s a lot I still don’t know but I’m a veritable genius now compared to then).

And that was it. Until March of this year when my daughter gently suggested (about a thousand times during lunch) that I should have a blog. So I promised her I would resurrect it, which I did in my first post in March of this year It Starts with a Thought – about a magical Girls’ Day Out, a new violin, and tweets from Charlie Daniels. (If you haven’t already, go out and buy every single one of his CDs and go see him in concert). Not only is he a fantastic musician, but he is one heck of a nice guy. I admire him tremendously.

And I’ve been blogging ever since.

I used to be a columnist. Wherever we went I usually ended up being a guest columnist for the area newspaper (editors soon learned that I think in 500 word columns and any time they were stuck, they could call me and say “I need 500 words by tomorrow, okay?” – or this afternoon – or in an hour – and I was crazy enough to say okay every time). I had an online column for a while called Time to Write about writing (when I was doing it way more often than I am now and occasionally making money at it). To me blogging wasn’t “real” writing. “Real” writing came with a paycheck and being able to see my column in a newspaper, short story in a book (though I didn’t get paid for that one – I did that one as a favor for the editor who was a friend and needed something on very short notice), or a magazine (did get paid for that).

Then I realized that blogging was actually writing a column, something I’ve been doing for thirty years or so, just in a different medium.

Ironically, my “other” writing (novels, screenwriting) I don’t get to as often as I’d like. But this bubbles over and flows through my heart and out of my fingers with pure joy, like music only with words.

So perhaps my goal should be not to set goals, as the ones I have set for my writing are not being kept while the one area I left to be totally free-form is where I’m spending most of my writing time.

I always wanted a daily column. I was afraid if I had one it would stop being fun and start being just another job I had to go to.

Now, much to my joy, I have one if I want it, or a weekly, or a whenever column, but a column nevertheless. Huzzah!

Then I realized that just as our marriage is fun and alive even after thirty-plus years, so my writing can be as well.

← My New Camera!
Coffee in My Garden – Coming Attractions…Wahoo! →